Posted in Weddings
I am super excited to share the great interview I got to do with Jillian Harris and Celebrity Bride Guide last week. As many of you know, Kate and I were honored to photograph Jillian Harris and Ed Swiderski of ABC’s “The Bachelorette” at the beginning of the year, and here, in this exclusive interview, Jillian shares some secrets about the Wedding she and Ed are planning and how they came to choose Wedded Bliss Photography for their intimate Engagement Session. 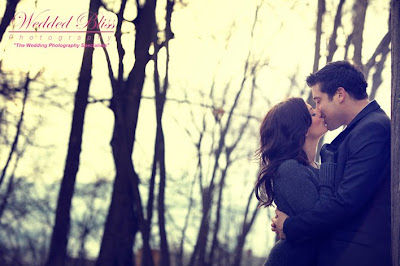 Engaged reality star Jillian Harris was touched when Renee Leveille of Wedded Bliss Photography sent her encouraging notes and flowers during her stints on ABC’s “The Bachelor” and “The Bachelorette.” Renee, who lives near Jillian’s parents in the Okanagan Valley in British Columbia, was a fan of Jillian’s but they had never met.

“Renee was always supporting me and I didn’t know her,” Jillian says. “To come home to your parents’ house and have a little treat like that, I was touched,” Jillian explains. “There were 50 or 60 photographers that had emailed me about doing engagement photos, but I just instinctively went to Renee because she had been a supporter. I went to her website and loved her work and it seemed like an obvious choice.”

When Jillian and fiance Ed Swiderski visited British Columbia at Christmastime, they got together with Renee for the shoot.

“I was adamant I wanted the photos outside,” Jillian says. “Ed and I love rock music, we love to socialize, we love art and food. I didn’t want the photos to be portrait style. I wanted something a little more fashionable. Renee took us on a tour of the Gellatly Nut Farm and there was a barn with green moss. Then we went to a wrecking yard. Both Ed and my father were in the automotive industry so they both loved that idea. Ed and I are both big car buffs too so it worked really well. It gave the photos that artsy feel but still with a pop of color.”

Read more of our interview with Jillian and find out about her wedding plans at Celebrity Bride Guide.

« Winter Wedding in Kelowna BC…but where is the snow?Canon 5D films entire Finale of House! »